You know when certain songs come on and you can’t figure out who sings them – or what they're called, but, for some reason, you know all the words? The songs you forgot about? The songs you haven’t heard in years? The songs you know, but don’t know why you know them?

We play those songs.

We're The Socially Acceptable Band — We're the cover band your mother warned you about.

We're a 9-piece cover band from Chicago. We originated in a Champaign, IL frat house basement in 2013 and have been playing all around the Chicagoland area since 2015.

It’s not uncommon for a TSAB set to cover 6 decades and 10+ genres in any given show. With 250+ songs (and counting) in our catalog, a Socially Acceptable show is guaranteed to have a little something for everyone.

Check out the rest of the site for photos/videos, background on the band, and upcoming shows — we'll catch you at the next one!

OR give us a follow on your social media platform of choice (or all of 'em, why not?) 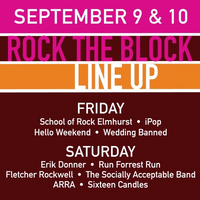 The Socially Acceptable Band LIVE at Rock The Block Elmhurst!

ROCK THE BLOCK PARTY IS BACK! Enjoy a two day festival full of bands, food, drinks, free family fun zone and so much more!